Over the past two decades, airborne capability for the police service has become increasingly important in the fight against ‘cross-border’ crime.

Helicopters are run on a shared basis, across 43 forces, under the National Police Air Service (NPAS) banner.

Operational headquarters of NPAS is situated in Wakefield city centre and there is an air base within West Yorkshire Police’s £100 million complex at Carr Gate, Wakefield. There are fourteen other police aircraft bases around the country.

NPAS is the first truly National Police Collaboration created under a Lead Force model and is widely regarded as a major accomplishment in that context.

Much of the credit for the initial success of NPAS is down to a retired WYP chief superintendent, Ian Whitehouse, who undertook extensive due diligence from August 2011 and managed the complex Programme to create the service. He then became Accountable Manager, from January, 2013 until his retirement in March, 2016. Effectively building a class-leading airline, from scratch, against a backdrop of having to migrate to new European regulations.

C/Supt Whitehouse retired from WYP, and NPAS, after losing confidence in his chief constable, Dee Collins, who also holds the role of Air Operations Certificate Holder in NPAS. Whitehouse and Collins, by a quirk of fate, actually trained together at Durham, at the start of their police service. Whitehouse from West Yorkshire and Collins from the Cleveland force. Collins had also been East Midlands lead for NPAS before joining WYP from Derbyshire Police in early 2014.

Many who know both are surprised that Collins outranked Whitehouse at the end of the latter’s police career. There cannot have been many chief constables in history who failed their sergeant’s exam four times, and then later fell into the chief’s role without a single candidate in opposition.

Following the retirement of Ian Whitehouse, the vacancy as NPAS Accountable Manager was filled by a WYP supertintendent, Tyron Joyce. The title of the role was also changed to Chief Operating Officer and there was also a promotion to chief superintendent. Joyce had previously worked under Whitehouse, within NPAS, as National Programme Manager. 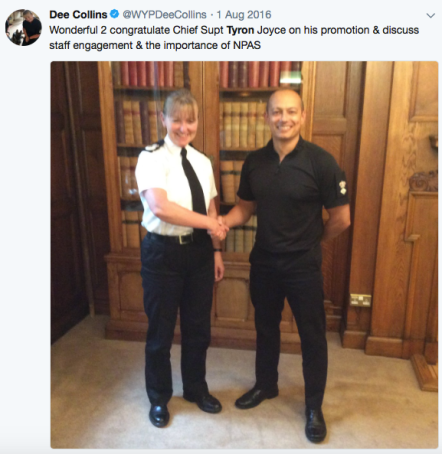 Within weeks of Joyce’s promotion, however, problems with staff began to surface at Carr Gate. Dee Collins was aware of the very serious issues, but continued to back her new appointment. To do otherwise would disrupt her ‘diversity’ narrative.

The culmination was, some eighteen months later, Joyce was served with misconduct papers by WYP’s Professional Standards Department (PSD) earlier this month (September, 2018). It is believed that there are, at present, eleven allegations with, potentially, twenty more to follow. He has not been in post at NPAS since that time, and is now prevented from accessing police force computer systems until the disciplinary process is completed.

Both the force, and NPAS press office, have refused to confirm that the alleged misconduct features bullying. Or, that two civil claims made by complainants have been compromised by way of a financial settlement. At least three other named members of staff are believed to have made complaints. A national newspaper, following up on this exclusive article, claims that Joyce is “obsessed with political correctness and minority issues”. Openly referring to staff in his “abrasive style” as “male, pale and stale”.

Joyce’s stock phrase is said to be: “I will manage terrorists out of my organisation”.

A questionnaire sent to NPAS staff, by the force, may lead to more. Viewed objectively, the way that document is framed could lead to arguments of unfairness by those representing Tyron Joyce at any future proceedings.

The chief constable has also been made aware that Joyce, a former Cambridgeshire and Metropolitan Police officer, who joined WYP in 2008, received words of advice from his line manager over conduct towards staff in 2013. She has refused to comment.

A retired officer has come forward to say that, in a meeting with Joyce, the latter said: “I’ve been in trouble before with PSD. They tried to do my legs, so I  have to be careful what I say to staff”. The retired officer found him pleasant and polite, in spite of the contentious subject in issue.

A source close to Joyce insists that any, or all, misconduct allegations are emphatically denied. He believes the complaints are motivated by malice from staff he criticised for poor performance. Support is being provided to him by the Superintendents’ Association.

His competencies listed on his LinkedIn profile include coaching of BME and female officers. He completes 28 years service as a police officer next month (October 2018).

He is presently on sick leave. Assurances have been sought privately from the WYP chief constable that appropriate welfare, and safeguarding, arrangements are in place for Tyron Joyce and his family. Specific concerns were raised. Ms Collins has not responded.

The post of Accountable Manager/Chief Operating Officer is presently filled, during Joyce’s absence, by NPAS Director of Operations, Oliver Dismore. According to Dismore’s LinkedIn profile he took over the role, temporarily, earlier this month (September 2017).

Deputy chief constable of West Yorkshire Police, John Robins, whose command team portfolio includes the force’s troubled PSD, is reported to be furious about the information ‘leaks’ concerning this matter.

One of those leaks concerns an allegedly racist remark made by Robins to Tyron Joyce (a BME officer), in 2013, when he is said to have described his support for Joyce, on a senior officer national accreditation course, as ‘a tick in a diversity box‘. His chief constable has refused to confirm whether this matter has been referred, as part of a mandatory reporting obligation, to the Independent Office for Police Conduct for an investigation decision.

Police Aviation News, in their October edition, say that ‘various sources have alleged that the base problem is wholesale bullying highlighted by rampant political correctness. In the wake of the [Cheshire chief constable] Simon Byrne bullying allegations, it seems that too many sections of NPAS are riddled with both’.

One thought on “Police helicopter boss goes off the radar”