On 3rd February, 2019, during a pre-trial hearing held in Bradford Combined Court Centre, a barrister, Olivia Checa-Dover, made several quite remarkable submissions to the judge, His Honour Neil Davey QC.

One of those was to the effect that West Yorkshire Police had, incredibly, instructed her to say they did not know where to locate one of their former officers.

More experienced, right-minded counsel might have told the instructing solicitor, Alison Walker, Deputy Head of Legal Services at WYP, not to place her in such a compromising position.

At the final hearing of a controversial, high profile civil claim, seven months later, Miss Checa-Dover denied making such a submission. The transcript of those earlier proceedings will tell a different story, as does the contemporaneous reporting of them, that has stood unchallenged by WYP, and their legal team, since its publication (read in full here).

The man in question, Mark Lunn (pictured above), was the lead investigator, and the only officer working full time, on a police operation codenamed Thatcham: The largest fraud investigation in WYP history, and one that ultimately led to the arrests of 91 men, and convictions for 45 of them, over ‘crash for cash’ insurance claims.

He was the arresting officer of a number of those men. One of which was a Bradford doctor, Abdul Rashid, who ran two general practice surgeries and a private medico-legal practice in the city.

On 7th March, 2012, Lunn turned up at the doctor’s home with fifteen other officers at 6.15am. His wife and three children were asleep when the knock was made.

Dr Rashid was not, subsequently, charged with any offence and he had issued a civil claim against WYP on the grounds that his arrest and detention by the police was unlawful. As such, Lunn was at the very centre of those legal proceedings and the police were doing all they could to justify not producing him as a witness.

The reason the police say they ‘couldn’t locate’ Lunn is because he had, by a catalogue of dishonest actions, tainted Operation Thatcham and placed the entire investigation in jeopardy. If this was revealed by way of cross-examination of Mark Lunn, in open court, the public and the press would come to know that the 45 ‘crash for cash’ convictions are, very arguably, unsafe.

It has only very recently been discovered, by a painstaking journalistic investigation (read more here), that by November, 2012, the police knew about the extent, and effect, of Lunn’s wrongdoing and its devastating impact on Thatcham. They chose to conceal that disclosure from the Crown Prosecution Service, and the suspects’ criminal defence lawyers, and thus began a sustained and far reaching WYP ‘cover-up’ that is now well into its seventh year.

The first stage of that audacious cover-up was to conceal Lunn’s wrongdoing from all except a small group of officers who had been involved in the internal misconduct investigations.

The second stage was not to prosecute him for what appears, arguably, to be at least one criminal matter (a second offence of computer misuse and associated data, licence breaches) and to apply no disciplinary sanctions at the end of that process, so that the misconduct investigation would attract no undue attention amongst the rest of the police force (at that time, misconduct findings against officers were published on police notice boards every Monday). A prosecution of Lunn would have also blown the cover-up.

The third stage was to keep Lunn under the WYP cloak, and out of harm’s way, until Operation Thatcham suspects were charged and the prosecutions of the ‘crash for cash’ perpetrators, and beneficiaries, were in chain. He is regarded as a loose cannon and his record both in the police and, subsequently, bears that out.

The fourth stage was to allow him, in August 2013, to resign from West Yorkshire Police with little, or no, adverse disciplinary record that would be a barrier to future employment. A reasonable hypothesis is that a deal had been cut with Lunn on this basis: Salary paid, and pension preserved, for at least another year; no adverse notes on his Human Resources (HR) file (the court heard during the civil trial that Lunn’s HR file had been ‘weeded’ and that disciplinary records had gone missing).

There is no other reason that WYP could justify overlooking a catalogue of serious misconduct issues, compounded by the fact that there is incontrovertible evidence that he repeatedly lied to two senior officers when confronted by some of the misdemeanours.

Mark Lunn’s lying did not stop when he left West Yorkshire Police. Before he had even left the force his name had already appeared, according to Companies House, on the list of Directors of a firm called Quo Vadis Investigation Services Ltd (QV). His biography on the company website was a fiction and he was forced to resign from QV after less than 3 months service. Lunn’s ‘success’ on Operation Thatcham was, apparently, the leverage for the appointment and the main feature of the bio, which included the claim he had been a detective for 20 years. The truth was he had been a CID officer for less than 5 years before forcibly removed from Thatcham, almost 2 years before the trial at which the men were convicted.

By 2014, Lunn was again attempting again to trade on Thatcham in a private venture. This time the vehicle was to be ‘Pennine Investigations‘. But a company of that name has never been registered and a Google search draws a blank.

In January, 2015 Mark Lunn started work at the Wakefield office of the Independent Police Complaints Commission (IPCC). But, true to form, that is not what it says on his LinkedIn biography. Enigmatically, he is recorded as working for the Home Office as ‘an investigator’ and is still listed as working there.

This, on any view, was an extraordinary turn of events: An ex-police officer who has a string of misconduct investigations against his name turns up at the policing body charged with maintaining public confidence in the police complaints system. The IPCC purported to do that by oversight of the investigation of complaints made by members of the public against police officers. It is hard to imagine someone less suited to such a role as Mark Lunn.

These are just some of his misdemeanours that have been uncovered so far: He was subject to a large number of misconduct investigations whilst a serving police officer, including what appears to be a major covert operation codenamed Waffleedge; another covert operation codenamed Wademere; seriously compromised WYP’s largest ever fraud investigation; has twice been found to have misused police computers and software (many police officers are sacked after a first offence); appeared to obtain £183,000 from a major motor insurance company using a bogus company as an investment vehicle whilst a serving police officer; discussed details of a sensitive police operation with unconnected third parties; is an obsessive and persistent liar; a fantasist who invents competencies and past vocational experience on his CV’s and biographies: and has confessed, in police interview, to having a very bad memory.

It is also more likely than not he was part of the conspiracy, along with a number of other police and civilian officers, to conceal his wrongdoing from the Operation Thatcham suspects. The driving force for that conspiracy appears to be the present Head of WYP’s Homicide and Major Enquiry Team (HMET), Chief Superintendent Nick Wallen. He was a detective inspector in the force’s notorious Professional Standards Department at the time.

It is anticipated that, when the full story eventually emerges, the list of Lunn’s misdemeanours may well be longer. Two former high ranking WYP colleagues describe him as “thick as a brick” and, not uncontroversially, lacking in the necessary integrity and intelligence to have ever been selected as a detective. Their actual words were much more direct and colourful.

Examination of documents authored by Lunn, and some of his emails, appear to bear that out. He is also given to inaccuracies, wild exaggeration and disparaging remarks about members of the public, and in one case a criminal defence solicitor, where and whenever it suited.

So the BIG questions are, how did Mark Lunn wangle a job with the IPCC in the first place, and why did he want to conceal that appointment from his LinkedIn connections, first and foremost, and anyone else amongst the wider public, curious enough to know what the miscreant officer was up to?

A subsidiary question is why did he leave the IPCC (now IOPC) fairly recently with, apparently, no other permanent employment to go to? Lunn is currently self-employed as a jobbing builder and free range egg vendor in rural Huddersfield, where he lives. Connexions Property Maintenance, ‘a family run business owned by Mark Lunn’, trades on the fact that he is a former police officer.

In what appears to be a regular ploy, Lunn sought external funding for Golcar Free Range Eggs. He raised £50 out of a crowdfunding target of £3,000. Rather less than the £183,000 he sought from 1st Central Motor Insurance to fund his private investigation business in 2012.

A further question is why did the police tell a circuit judge that they couldn’t locate him when he was working at the IPCC, amongst other former police officers, less than 300 yards from WYP headquarters in Wakefield?

Press enquiries have been made of the Independent Office for Police Conduct, the successor organisation to the IPCC. Contact has also been made with Derrick Campbell, the IPCC Commissioner who controlled the Wakefield office at the material time.

The Home Office and West Yorkshire Police have also been approached for comment. The latter has been asked why a circuit judge was also told by Miss Checa-Dover that Mark Lunn was not the man leading the Operation Thatcham, before he was forcibly removed. Evidence heard, and documents exhibited at the final hearing of the civil claim last month plainly showed that he was (read more here).

The Police Federation press office has also been contacted. The present Chairman of their West Yorkshire branch, Brian Booth, is a friend of Mark Lunn. Mr Booth has been contacted previously but has not replied.

Enquiries have also been made of West Yorkshire Trading Standards regarding Connexions Property Maintenance. The Trading Standards mission is to aim to ensure that the people of West Yorkshire are well informed and empowered consumers who have the confidence to interact with businesses safely and securely. Mark Lunn’s history of misrepresentation and his naked attempt to solicit business by purporting to be an honest, ethical, professional police office is concerning to say the least. 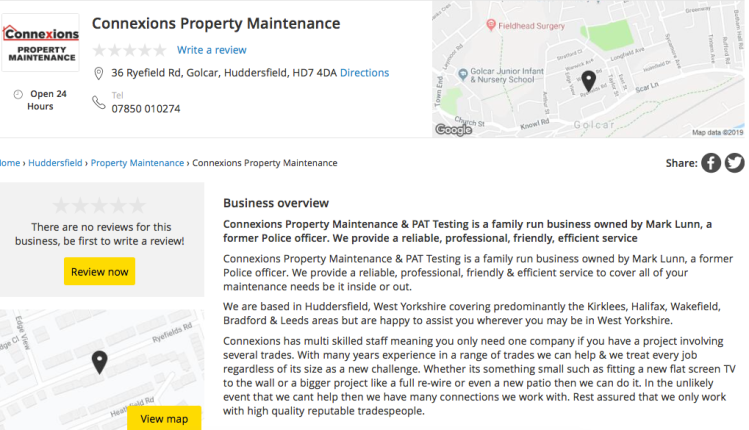 A series of questions has been put to Mark Lunn. He has also been offered right of reply.

© Neil Wilby 2015-2019. Unauthorised use, or reproduction, of the material contained in this article, without permission from the author, is strictly prohibited. Extracts from, and links to, the article (or blog) may be used, provided that credit is given to Neil Wilby, with appropriate and specific direction to the original content.

One thought on “Chickens come home to roost”