Oldham is a town with a shocking reputation, both regionally and nationally. That is inarguable: It is the 17th worst town to live in England. Four of its twenty electoral wards feature in the top 1% of the most deprived in the country. It has a history of racial tension, most recently at a widely reported civil disturbance in Limeside in 2019. More infamously the wide scale riots in 2001. The worst ethnically-motivated riots in the United Kingdom since 1985, briefly eclipsing the sectarian violence seen in Northern Ireland.

It has the most toxic political culture in the country, not least because the far right of the spectrum, Combat18, BNP, EDL, UKIP, Britain First, has always seen the Borough as fertile ground. Recent press coverage has highlighted their disproportionate dominance of social media groups in Oldham (read more here). As recently as this week, the Council Leader’s car was firebombed outside her family home in the Glodwick ward where Cllr Arooj Shah has lived all her life. The stoking of racial tensions is put forward as a highly plausible motive.

Effective public (and press) engagement might be seen as one of the prescribed remedies on the road to recovery. Especially for the paid officers of a Metropolitan Borough Council that has sat and watched, virtually motionless and rudderless, whilst the town’s reputation is repeatedly trashed.

Following an extraordinary exchange of emails with the Constitutional Services section of Oldham Council, and a deft introduction of previously unheralded rules, its Monitoring Officer (and Borough Solicitor), Paul Entwistle, ruled that a public question framed by Neil Wilby, the author of this piece, would not be placed before a full Council meeting that took place on Wednesday 14th July, 2021.

The process of asking a public question appears straightforward, as the image below shows. It is an unusual route for a journalist to take, but the subjects of the question, three serving Oldham councillors, Neil Hindle, Brian Hobin and Mark Wilkinson, refuse to answer questions either via email or social media (read more here). All belong to the Failsworth Independent Party. Wilkinson’s wife, Kathleen, is the Party Chair and driving force. She is also curator of the discredited ‘Failsworth Matters‘ Facebook page which has been the subject of considerable and adverse press scrutiny since the last local elections took place in May, 2021. With particular focus on its status as both haven and vector for criminals and far right activists. The Wilkinsons also have strong links with the thoroughly disgraced ‘political activist’ Raja Miah whose unchecked and bilious stream of hate and division has blighted the town for almost three years. 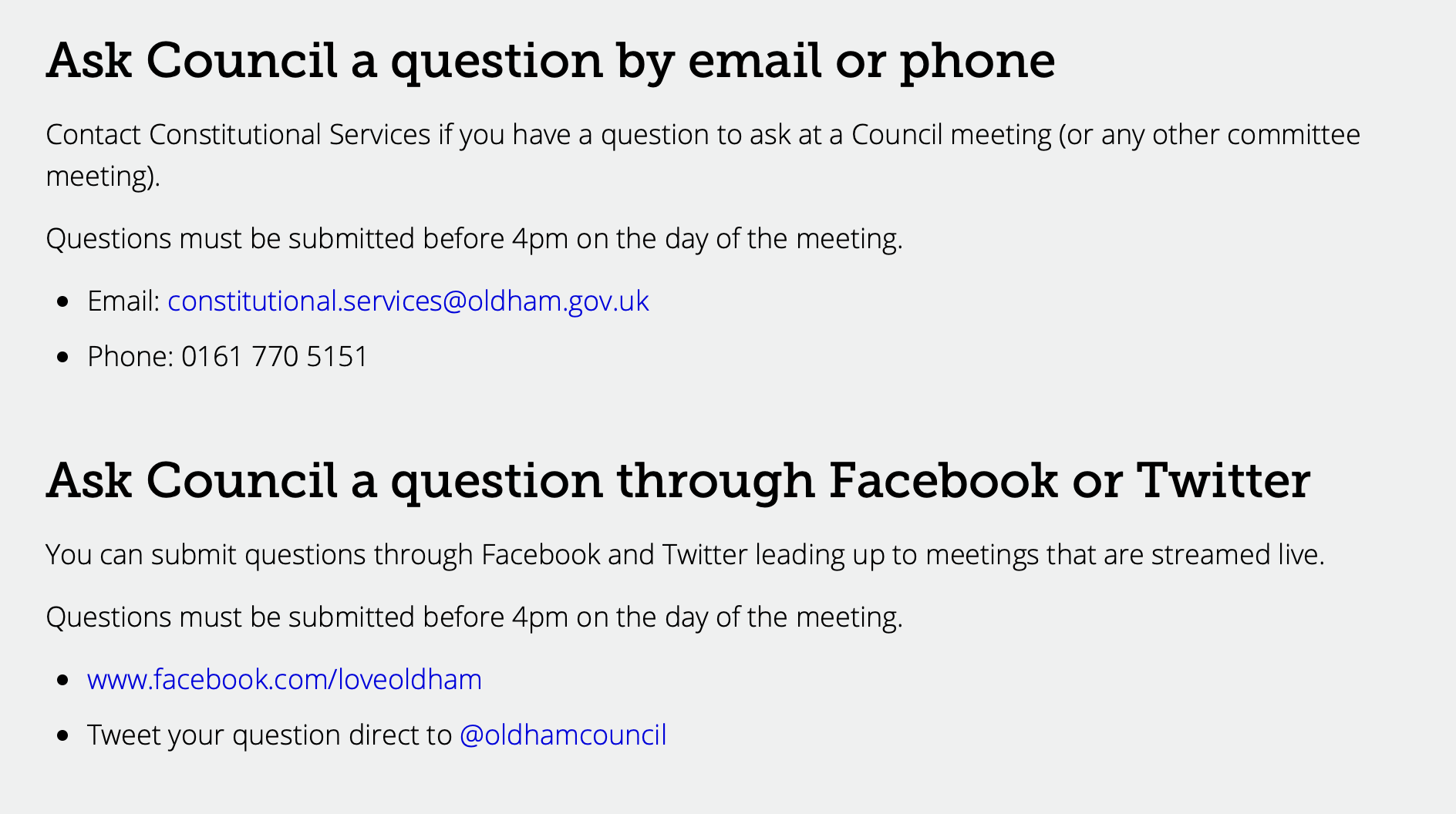 During previous investigations of Miah’s and the Failsworth Independents’ oft-repeated and, so far, evidence-free claim of a long-running Council and police ‘cover-up’ of child sexual exploitation (read more here) a number of other misdemeanours came to light. One of those concerned a business that was owned and controlled by Ryan Wilkinson and his partner, Holly Cuthbert. The former is the son of Mark Wilkinson and the step-son of Kath.

The business, Bride to Be (Manchester) Ltd was finally wound up on 21st June, 2021. At the time, according to Companies House, the business owed creditors £279,000. Of which £48,000 was owed to customers. In the run up to the local elections, and beyond, the business was registered to the Failsworth Independent Party headquarters, which also doubles as the Wilkinsons family home. The business appeared to collapse in 2016, since when Ryan Wilkinson has moved to France, where he bought and renovated a property in Aquitaine. He also recently broadcast plans to buy a racehorse in partnership with ITV Racing presenter, Matt Chapman. Wilkinson claims to be now operating as a financial trader. The transition from failed business operator, his only other business venture registered at Companies House is also dissolved, to overseas property developer and equine investor is, as yet, unexplained. As are plans to recompense those to whom money is owed from the Bride to Be debacle.

This, then, was the public question framed for broadcast to the Council meeting earlier this week:

“At the home address of Cllr Wilkinson, also listed as the HQ for Failsworth Independent Party, a limited company is registered that owes creditors £279,000. Including £48,000 owed to members of the public. Some of the debts date back over 5 years.

“It does not appear on his Register of Interests. Nor those of Cllr Hobin or Cllr Hindle.

“The company accounts filed at Companies House appears to show the entity to have little or no tangible, or intangible, assets. Notwithstanding, a late model Range Rover can regularly be seen parked at the property and a search shows that 282 Lord Lane, Failsworth is, apparently, mortgage free.

“Can the Mayor, or the Council Leader, seek assurance from Cllr Wilkinson, and other Members of the Failsworth Independent Party, that all necessary steps be taken to discharge those debts in order to avoid further damage to the reputation of the Council, other Members and Officers?”

After a delay of two days, this was the response from Constitutional Services:

“Thank you for your email, unfortunately your question cannot be asked at the Full Council Meeting as it relates to the conduct of Members and this is excluded from public questions. However, your question will be put to the Councillors for their response to you”.

That came as a surprise for two reasons: Firstly, there is nothing on the Ask A Public Question page (and still isn’t at the time of publication of this article) that refers to any exclusions and, secondly, does not, viewed through the lens of its author, involve allegations of misconduct. Much rather, a polite, pertinent and fair request that the subject councillors do the decent and honourable thing, in accordance with the Nolan Principles in Public Life, and give an assurance to Council of same.

Those sentiments were expressed to Constitutional Services in terms:

“Can you please point me to the section on the Oldham Council website that precludes such questions. There are no such prohibitions here:

“Further, and in any event, the question concerns reputation management of the Council as a whole, not Member conduct issues.

“It would have been framed entirely differently if that was the case.

“In those circumstances, I fully expect the question to be asked at tonight’s meeting”.

At that point, Constitutional Services, still operating behind a cloak of anonymity, changed the game by the introduction of a purported prohibition:

“Under the Council procedure rules of the Council Constitution the information is as follows:

Questions can be asked of Cabinet Members. Questions shall not be accepted

if the Monitoring Officer considers that the question:

which affects the Borough;

meeting in the past six months;

e) is formed to make a statement rather than to receive information;

f) is about the conduct of individual members

“I have provided the link to the relevant part of the Constitution”.

It wasn’t apparent at the time, but has become clear during the writing of this piece that the section of the Constitution quoted does not, in fact, appear to relate to Public Questions but, instead, to questions to be asked of Cabinet Members (presumably by non-Cabinet Members). It also requires a knowledge of the law and an assiduous search through six months of past minutes, at the very least, to pass just two of the tests.

Nevertheless, a challenge was put to the Council’s objection, politely, but firmly:

“Thank you for the prompt response.

“I repeat that the question posed does not concern the present conduct of Members, rather the risk of reputational harm to the Council by potential future misconduct.

“Again, it is reasonable to insist that the question is asked at tonight’s full Council meeting, absent of a forensic explanation as to how the Monitoring Officer arrives at the conclusion that it does, taken at its face, involve Member conduct.

“Alternatively, Dr Wilkins may, of course, suggest modification to the question, as framed, in order to allay her concerns.

“Further, and in any event, it is recommended that the Council amend the ‘Ask a question’ page to reflect the existence of Section 10.2 of the Constitution. How does the Council expect a member of public, or indeed a journalist, to know the limitations imposed by the Constitution”.

That produced a short and rather surprising reply from the still anonymous Council official: “You will be able to submit the question if it is amended to follow the scope of questions as per the Constitution”. It was a now-familiar ducking of issues that appears to pervade a number of departments across Oldham Metropolitan Borough Council and a culture that appears to cascade down from the very top of this troubled public authority. These were the last words on the matter.

“You are missing the point. Deliberately, one assumes?

“I strongly urge the Monitoring Officer to follow the steps I have carefully outlined for her. It is really very simple, basic procedure.

“The presumption, at present, is that she is acting unlawfully – not for the first time in my own experience – in refusing to allow the question to be put forward.

“It is also appropriate to remind Dr Wilkins at this point that she is a public servant, not an autocratic dictator in a rogue East African state.

“In the circumstances, I have copied in the Mayor and the Leader of the Council. It is important for Members to be aware of the likely reputational consequences of the Monitoring Officer not following the guidance with which I have so generously provided her”.

Constitutional Services, whose Principal Officer is Sian Walter-Browne, did not respond to that email and, in the event, the question was not asked at the Full Council Meeting.

The promise by Constitutional Services to obtain responses from the FIPs councillors has not been fulfilled, either.

But most tellingly, if Dr Wilkins, the Council’s now-departing chief executive and her senior team, including the Monitoring Officer, considered that the public question raised conduct issues then a referral to the Council’s Standards committee should have been automatic. An insider says no such referral has been made.

The question regarding the Wilkinsons, the Failsworth Independent Party and the fate of the ‘missing’ £279,000 is not going to go away. Neither is the issue of the large amount of dead wood at top of the paid officer tree in Oldham Council, where cavalier law-breaking (Freedom of Information Act for one), Constitution bending and good old fashioned issue-dodging appears to be ingrained in its culture.

UPDATE: Dr Wilkins and the Failsworth Independent Party were offered right of reply. Both declined the invitation to comment. A number of councillors past and present have, however, made contact to say that the Council was wrong to refuse the question.

It has also been posited that if the chief executive and/or the Monitoring Officer considered it a misconduct matter then she should have immediately referred it to the Standards Committee. According to a well placed source, that has not happened to date.

An insider says no such referral has been made, although some discussions are said to have taken place. Carolyn Wilkins has since this article was published, announced that she is leaving the Council by mutual consent.

© Neil Wilby 2015-2021. Unauthorised use, or reproduction, of the material contained in this article, without permission from the author, is strictly prohibited. Extracts from, and links to, the article (or blog) may be used, provided that credit is given to Neil Wilby, with appropriate and specific direction to the original content.

One thought on “What the Doctor ordered”