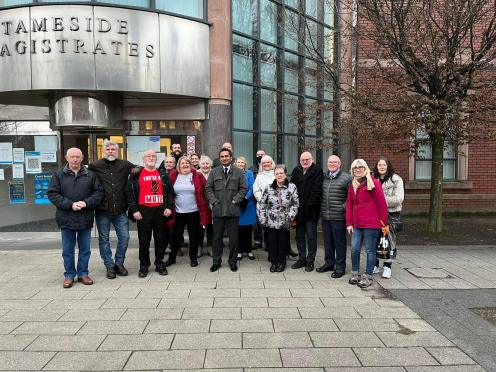 A group of political agitators who self-style themselves as ‘The Rabble‘ is being mobilised to form what they say will be a peaceful protest on Wednesday 16th March, 2022 outside Oldham Civic Centre.

Their Leader, an unemployed 48 year old man from Mossley, Tameside, Raja Miah, issued this rallying cry yesterday (Saturday 12th March, 2022) on his disgraced and frequently banned Facebook platform, Recusant Nine. [DISTRESS warning – it is in inflammatory and hate filled, divisive language; the undercurrent is racist; and little or none of it comes even close to truth or reality]:

“With Council corruption and the cover up of CSE now proven, a handful of brave townsfolk prepare to march on an out of control Oldham Council and demand the removal of AROOJ SHAH and the arrest of members of her Labour Party run Council.

“As with previous demonstrations, the protesters are likely to be sparse in number and frail in strength, out muscled and out numbered by the private security guards hired by the Council to intimidate those that dare stand against them. Sadly, the sons and daughters of a once proud town are yet to find their courage and join the ranks of the elders that have already sacrificed so much fighting for their futures.

“Wednesday’s Full Council meeting will be the last before May’s election. It will either herald the end of AROOJ SHAH’s malice and mobster endorsed reign as leader of our town, or it will mark the beginning of a new empire. An empire where the tyranny of what has taken place before risks paling into insignificance compared to what will come next.
I ask you;
– What sort of town do we want to leave behind to our children?
– What sort of town do we want their children to call their own?

“You’ve all seen what has happened this year. You’ve all witnessed what happens to those that dare oppose SHAH and her Labour Party run Council. If our rallying call ever meant anything, surely it must mean something now more than ever. And if not now, then we risk it being never.

Miah is presently on court bail awaiting trial on what Greater Manchester Police say are charges of harassment and malicious communications (read more here). He has also been warned by GMP about witness intimidation (read more here). At least one of the witnesses in those trials will be at the Civic Centre during the protest.

If Miah attends, there is a strong possibility he will be arrested again. Which, presumably, is why he is wanting an ageing collection of axe-grinders and vulnerable, intellectually challenged and mentally ill supporters, from whom he regularly leeches money in one of his many money-making enterprises connected to Recusant Nine, to put themselves in the front line of his long running hate campaign against the local Labour Party, Oldham Council and the police.

This self-styled political activist is struggling to maintain any semblance of relevance, his credibility having been shattered many moons ago over a huge scandal around two spectacularly failed free schools that he founded and ran. One in Manchester called Creative Studio and the other, Collective Free Spirit, in Oldham (read more here). His hate-filled campaign of vengeance against the various public authorities and the town’s MPs began after he was publicly exposed over those grotesque failings. He claims to have around 100 subscribers, who pay £5 each month for ‘exclusive access’ to the same class of drivel quoted above, or worse. With that minimal supporter base, not all of whom are local, he insists, frequently, that he speaks, from his Tameside base, for an entire neighbouring Borough of 237,000 people.

Miah is particularly agitated at the moment over a further delay in the publication of a report into allegations of multi-agency ‘cover-up’ of child sexual exploitation in Oldham (read more here). He says that the delay is proof positive of his long-running allegations of Labour politicians in the town turning a blind eye to the rape of white children in return for Asian block votes at elections. Usually accompanied by lurid tales of attempted murder, mobsters, gangsters, criminal cartels and ‘Pakistani goons’. The independent CSE Assurance Review team say the reason is much simpler: Other victims have been put forward as relevant to their investigations, following a ‘fair process’ consultation at the draft report stage,  and the extension of time is to ensure their voices are heard.

A close ally of Miah, Kaiser Rehman, a participant in that same fair process consultation (read more here), goes further and says: “The Review Team told me today (8th March, 2022) that the report would be delayed and shared with me their reasons for this. I do not believe them. I do not believe any new evidence has come to light and this is nothing more than a political ploy”.

He adds, without specification or evidence, “The confirmation of massive failings by Oldham Council to investigate grooming and sexual abuse allegations would lead to a collapse in the Labour vote in May’s election”.

Rehman, a habitual liar and fantasist very much in the style of Raja Miah, was convicted last year, and is currently serving an eighteen month suspended prison sentence, over harassing a sitting Oldham councillor. A restraining order is also in place which, taken at its face, precludes his attendance at the Civic Centre protest.

Kaiser also, more recently, lost a substantial harassment and libel claim in the High Court in London brought by another sitting Oldham councillor (read more here). At the heart of both those cases was false, and grotesque, allegations, made by Rehman, of child sex abuse. It is those allegations, about which he admitted, before a High Court judge, he lied, that he now claims Oldham Council didn’t investigate. That, very regrettably, appears to be the ground upon which Miah has now set about defaming the two investigators leading the Assurance Review and, further, claiming that he already knows more than anyone else about the ultimate content of the report.

By way of contrast, Maggie Oliver, a well respected and nationally known champion of child sex abuse victims, says this about the delaying of the Assurance Review:

‘Everyone who has followed my work will know that victims and survivors are at the heart of everything I do and must always be heard. The Independent Oldham Child Sexual Exploitation Review is an important part of that principle.

‘It recently became clear that not all the voices that needed to be heard in this Review had been spoken to. I am the very last person who wants this process to be held up any longer than absolutely necessary, but I also don’t want a partial report that has holes in it and leaves victims feeling that they have been silenced or excluded in any way

‘It’s fair to say that I have found the Review team [Malcolm Newsam MBE and Gary Ridgeway] honest and independent in all my dealings with them. They have earned my trust through the thorough work they did reporting truthfully on Operation Augusta in 2020, despite determined moves from those who would have had the report heavily redacted.

‘Consequently, although I know that this latest delay will cause distress, I feel all victims and survivors should have the opportunity to be included in this report, so we can all have confidence no stone has been left unturned. If that means there is a slight delay to its publication then I think we have to accept that, however difficult it may be’.

That calm, reasoned acceptance of the delay appears, unsurprisingly, to have been very widely accepted in Oldham. Leaving Raja Miah, Kaiser Rehman and The Rabble increasingly isolated and, in effect, publicly protesting about child sex abuse complainants, victims and/or survivors being given a voice.

Miah, Rehman and his friend and fellow Conservative, local Party Chair Lewis Quigg, are believed to be the prime movers behind a poorly drafted and badly thought out motion, set to be put before Full Council (and the ‘peaceful protesters’ in the public gallery) on 16th March (read more here) that leaves them in much the same position of, ostensibly, silencing CSE victims. Quigg, another Raja Miah cultist, has stood a number of times, unsuccessfully, for election to the same council. This latest misadventure will not increase his chances of breaking that duck in the Royton North ward in May.

As a footnote, even the much used Recusant Nine strapline ‘Do Not Fear Them’ has turned out be a another big, fat Raja Miah lie. Challenged to an open, public debate with local charities set to benefit from the staging of the event, to the tune of at least £2,000, The Man from Mossley has, so far, bottled it (read more here). Which is an issue much more worthy of protest by The Rabble than their misconceived plan to have councillors arrested when there isn’t the remotest evidence that any criminal offence has been committed by any of them.