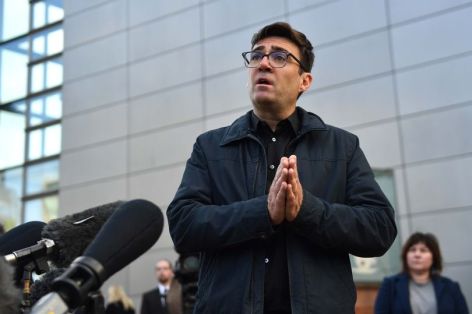 The release of a report into an alleged ‘cover-up’ of sex offending against children in Oldham, commissioned by the Greater Manchester Mayor, Andy Burnham, has suffered a further delay.

The Oldham Strand of the Assurance Review chiefly concerns historic child sexual exploitation (CSE) allegations, and any Oldham Metropolitan Borough Council failings, and those of partner agencies, principally, that may have been associated with them.

The full Terms of Reference for the Assurance Review can be read here. Briefly, it will consider allegations of historic abuse that have been made on social media involving shisha bars, taxi companies and children’s homes. Principally propagated by Tameside based, Raja Miah, whom, apparently, re-invented himself as a ‘child sex abuse campaigner’ in order to disguise his own catastrophic failings as a free schools operator, which were made public in early 2018 (read more here).

The Oldham Strand of the Assurance Review was brought about by the then Leader of Oldham Council, Sean Fielding, and Henri Giller, Chair of Oldham Child Safeguarding Partnership, who wrote jointly to the Mayor and Jane Shuttleworth, Chair of the Greater Manchester Safeguarding Standards Board to request a merging of the Council’s own investigations into the wider Independent Review being conducted by Messrs Newsam and Ridgeway.

Malcolm Newsam, a former commissioner for social care in Rotherham, and Gary Ridgway, a former Detective Superintendent with Cambridgeshire Police, have been appointed to head up the review team. It has been confirmed that the review is examining evidence from as far back as 2006 and as recently as 2017.

They were the same team behind the widely acclaimed report into Operation Augusta, released in January, 2020, which looked at the handling of CSE by the police, councils and social services in Rochdale and Rusholme in South  Manchester (The Curry Mile).

The release date for the report has been delayed several times, previously, and Andy Burnham announced in an ‘Ask Andy” Q&A session at Oldham Library in November, 2021  it was scheduled to be made public in week beginning 24th, January 2022. Previously, Leader of Oldham Council, Cllr Arooj Shah, had told a Full Council meeting in September, 2021 that the report would be released ‘by the end of the year at the latest’.

But on 15th January, 2022 news was broken exclusively on this website, just a day after the Oldham Times said it was on track for the 24th, that the publication of the report was set to be delayed again (read in full here) with the Mayor saying it would be released after a delay of around three weeks. It soon became clear that even that deadline would be missed and his office then reverted to the line that they were unable to give a fixed date for publication.

“I want this important review to be published as soon as possible.

“But I also have a responsibility to ensure that no corners are cut and that it is as comprehensive as possible.

“Following the fair process letters and feedback provided, the independent review team will be taking additional victim testimony, which could lead to further examination of case files and other interviews.

“As a result, they cannot, at this stage, give an indicative date for publication and will provide a further update at the earliest opportunity.

“I fully appreciate how frustrating this news will be, but it is important that we give the review team the time they need to produce as thorough a report as possible so it has integrity, and most importantly, victims feel that they’ve been listened to.”

“I fully understand the desire to see this review published as soon as possible and Gary Ridgway and myself are working hard to do this at the earliest opportunity.

“However, we must balance the need to get the report out as quickly as we can while ensuring that we have approached the review fairly and that no stone has been left unturned.

“Very recently, further significant evidence has been brought forward following the fair process consultation and it is right that we take the time to hear that evidence and incorporate it within our final report.

“Our report will be published as soon as this piece of work has been completed”.

Jim McMahon MP and former Oldham Council Leader says delay in publication of the Oldham CSE Review will lead to “false allegations of cover-up and conspiracy” being re-cycled by the usual suspects. A prophecy that came true within minutes of it being uttered.

He added: “I maintain the belief that the final review will be victim-focused and robust but am concerned that this additional delay will be used to undermine the review.

“But, what ultimately matters is that the investigation is comprehensive, and if any failings are identified by organisations or individuals, they are fully explored and published.

“I have been careful not to comment on the Review until it is published, to avoid either pre-empting or prejudging it, but I can give an assurance that it is my intention to ensure, as I have always endeavoured, that victims are put first and foremost.

“There are too many examples of victims not receiving the support they deserve, either because of individual professional judgement, organisational or political culture, systemic failure and at times the overwhelming demand not being met with adequate resources.

“If the additional time is spent securing justice, and I maintain confidence in those leading this Review, then that must be allowed to conclude properly.”

The Maggie Oliver Foundation has released this statement:

‘Everyone who has followed my work will know that victims and survivors are at the heart of everything I do and must always be heard. The Independent Oldham Child Sexual Exploitation Review is an important part of that principle.

‘It recently became clear that not all the voices that needed to be heard in this Review had been spoken to. I am the very last person who wants this process to be held up any longer than absolutely necessary, but I also don’t want a partial report that has holes in it and leaves victims feeling that they have been silenced or excluded in any way

‘It’s fair to say that I have found the Review team honest and independent in all my dealings with them. They have earned my trust through the thorough work they did reporting truthfully on Operation Augusta in 2020, despite determined moves from those who would have had the report heavily redacted.

‘Consequently, although I know that this latest delay will cause distress, I feel all victims and survivors should have the opportunity to be included in this report, so we can all have confidence no stone has been left unturned. If that means there is a slight delay to its publication then I think we have to accept that, however difficult it may be’.

A statement has also been provided by Cllr Arooj Shah, Leader of Oldham Metropolitan Borough Council:

“The most important thing is that all those affected by the issues raised in this independent report, including survivors of CSE who have already been through so much, get the chance to take part in the review process as fully as they would like to.

“While I am keen for the process to reach its conclusion, it is absolutely vital that we ensure those involved are properly listened to and have their voices heard.

“If this means delaying publication until the independent Review team have been able to do this additional important work, then this is absolutely the right thing to do.”