Much has been written elsewhere on this website about, very arguably, the most notorious hyperlocal political party in the country. It is a rare week, indeed, when the Failsworth Independent Party (FIP) is not embroiled in one scandal or another. Mostly brought about by the deceit and subterfuge that threads through just about everything they touch (read more here).

Lying, to them, is instinctive. As is the ability to mask their own failings, by blaming others, or claiming the credit for actions, initiatives or community successes brought about by the hard work, determination and enterprise of others. They have no cogent policies in place, apart from hating the ruling Labour Party in Oldham Metropolitan Borough Council, and have achieved nothing in the Council Chamber, apart from alienating almost every other elected Member within it (read more here).

Their attitude and behaviour during meetings rarely rises above the questionable, epitomised by the FIP Group Leader, Cllr Brian Hobin, a convicted fraudster and an arrogant, discourteous self-serving individual whose ready resort to personal smears has brought him only shame and ridicule (read more here). He and the other two FIP councillors, Neil Hindle and Mark Wilkinson, can’t be bothered to either turn up to meetings or pay attention when they are present. Cllr Wilkinson is particularly gaffe-prone, finding Standing Orders much too tiresome to learn and understand – and, misguidedly, functions on the basis that his is quite the most important voice in Council and the one everyone wants to hear (read more here).

In the week in which the Greater Manchester Mayor, Andy Burnham, announced that there was to be a further delay in the long-awaited Oldham Strand of his Region-wide Child Sexual Exploitation (CSE) Assurance Review (read more here) the FIP decided to weigh in with their usual cocktail of lies, sententious piety and ludicrous assumption. For example, how do the authorities go about prosecuting an alleged offender on the basis of not acting on a rumour they heard?

This is the text of their statement on the Party’s Facebook page:

“Failsworth Independent Party have had concerns about CSE in the Borough for some time.
Cllr Brian Hobin put forward a motion demanding an Independent investigation with full legal jurisdiction which was voted down by all Labour councillors.

“The administration at OMBC instead asked the GM Mayor to include Oldham in his “review”.
We are very disappointed that this report has been delayed again. However, we understand and accept the reasoning as given by the amazing Maggie Oliver who knows the issues more than most (link to Twitter post here).

“We will not accept a whitewash or cover up.

“We want every aspect investigated, any guilty person to feel the full weight of the law and anybody who knew or even heard a rumour and did nothing about it brought to book (link to statement of Greater Manchester Mayor here).

This was the response of the author of this piece, Neil Wilby, posted on the FIP page, below their statement:

“Your statement is factually flawed. May I respectfully invite FIP to issue a correction at a convenient moment?

“This is the timeline you may wish to adopt: OMBC and Oldham Safeguarding Board asked GMCA to include Oldham in their Region-wide, and independent, Assurance Review in November 2019. Brian Hobin’s badly drafted motion was put before the Council a year later, in November, 2020, at the behest of Raja Miah. Alongside whom, the same Cllr Hobin, and FIP’s Mark and Kath Wilkinson had all appeared, separately, as star guests on Miah’s infamous Sunday night podcasts by then.

“Operation Hexagon, a concurrent police investigation into CSE allegations in Oldham, was also launched in November, 2019.

“Cllr Hobin made a second special guest appearance on Recusant Nine in April, 2021. Two months later, in a lengthy Manchester Mill press interview, Kath and Mark Wilkinson told Joshi Hermann that they had never seen Miah’s ‘dossier of evidence’ and he had refused to go with Mark, to the police, to report their collective CSE concerns.

“As recently as last week, Cllr Hobin was supporting and interacting with Miah and his associates on Twitter. Cllr Wilkinson (as he was by then) publicly affirmed his support for Miah, on Twitter, in August, 2021.

“Ten days ago Miah claimed he had submitted a dossier of CSE evidence to GMP on an unspecified date. A position from which he now appears to have, unsurprisingly, retreated. He submitted no such evidence to the Oldham Assurance Review.

“Over the past three days, Raja Miah has smeared and defamed Malcolm Newsam MBE and Gary Ridgeway – and publicly attacked Maggie Oliver saying she knows nothing about CSE in Oldham. In your corrected statement may I also respectfully invite you to address these important matters concerning the Review investigators and one of their key contributors, and make the position clear as to where FIP stand on them. Thank you”.

The out-turn from that politely expressed, public interest message was that, less than four hours later, the comment was removed and Neil Wilby, an accredited journalist, blocked completely from accessing the FIP Facebook page.

The FIP lie, of course, remains uncorrected at the time of publication of this article and, equally remarkably, a comment from the notorious criminal, Stephen Walsh, one of FIP’s biggest and most vocal supporters, remains on the page. Walsh, an incorrigible, and unashamed, far-right racist, stalker and troll, is credited with starting the Oldham riots in 2002, states that two local, prominent and very well known Labour politicians ‘should not be allowed near children’ as a result of the delay in publication of the CSE Assurance Review.

Those politicians are not named here, as it serves no-one’s interest to cause further distress. The alleged child sex offender within Walsh’s circle of friends is not named, either. Although it is certain that the thug knows who it is and continues to shield that person. The apparent obsession with ‘nonces’ being a part of that deception.

Another commentator on that same FIP Facebook page is Walsh’s friend and political hero, Raja Miah. A persistent, mendacious, hate-filled liar with close links to the rest of the criminals, thugs, racists and perverts that form the praetorian guard for FIP, hounding and harassing their critics.

Miah is currently on court bail awaiting trial over what the local police say are harassment and malicious communication allegations. He robustly denies wrongdoing (read more here) and continues to enjoy public support from Cllrs Hobin and Wilkinson, in particular. Walsh is currently the subject of several police complaints over similar activities. He has also been reported over possession of what appears to be a rapid-fire machine gun (possibly a Belgian M240). 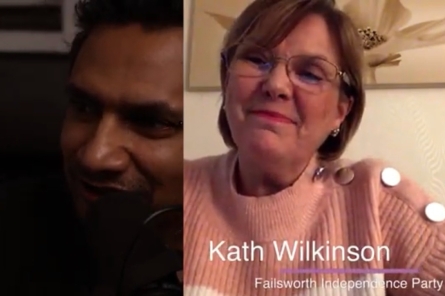 Cllr Hindle has, in the past, described himself, publicly, as a friend of Miah. The present status is unknown. The FIP Party Chair, Kathleen Wilkinson, an admitted liar and drunk (read more here) is also a known Miah cultist, having appeared as a star guest on one of his infamous Sunday night podcasts. Both her and her husband have previously funded Miah’s hate-filled division as subscribers to his Recusant Nine social media channels. It is not known if they still do and they refuse to answer questions on the topic.

Many in Failsworth and the wider Borough of Oldham will say that group fully deserve one another.