A leak from a high profile source in the perennially disgraced Failsworth Independent Party (FIP) has revealed that controversial local activist, Warren William Bates (pictured above right), is set to stand for them in the Oldham Metropolitan Borough Council elections in May, 2022.

74 year old ‘Wazza’, as he is fondly known in the bookmaker shops around the area from which he is not banned, has had more parties than Boris Johnson and his Number 10 team in a chequered and notably barren political career. He claims, repeatedly, that he has been a member of the Labour Party for over 60 years; stood for the Green Party in 2004; won a seat on the Council in 2014 with the far-right United Kingdom Independent Party (better known as UKIP) but fell out very publicly with them, stood without success as a far-right Brexit Party member in 2018, snatching defeat from the jaws of victory, and now joins FIP after claiming, until very recently, he was founder and sole member of the racist, xenophobic, misogynistic and far-right The Real Independent Party.

Another leak has uncovered the original FIP plan, which was for its Chairwoman, Kathleen Wilkinson (pictured above centre), who tells almost as many lies as Boris Johnson, to stand in the Failsworth West Ward, but she withdrew after fears that she it would interrupt her afternoon drinking sessions or she would crumble under public scrutiny during the election hustings. Including questions over the alleged £279,000 Bride To Be (Manchester) Ltd ‘long firm fraud’ that has dogged her and her husband, Cllr Mark Wilkinson (pictured above left) for almost a year (read more here).

The sole Directors of the bridal firm were Ryan Wilkinson (Mark Wilkinson’s son and Kath’s stepson) and his partner, Holly Cuthbert, when it went bust. Kath Wilkinson has made a series of contradictory, implausible claims over what happened to the money lost by creditors. Not least, in September, 2021, that all creditors have been repaid. A claim exposed as an outrageous lie by simple reference to the Companies House website (read here). She abandoned her main Twitter social media account very shortly afterwards as it became too toxic.

The claim that her husband, Cllr Wilkinson, was not involved in the business was later changed to “my husband and my mother-in-law put in £20,000 to ensure all brides got their dresses from the manufacturer”. That would, it seems, disclose an offence under the Companies Act 2013 and Insolvency Act, 1986 by way of preferment of creditors.

The Wilkinsons have been asked to provide evidence of the claimed £20,000 injection and the Bride To Be liquidator and the Department for Business Innovation and Skills (DBIS) have been contacted to make them aware of this latest disclosure. There is nothing in the final report filed at Companies House to suggest that the liquidator was aware of this arrangement.

Ryan Wilkinson and Ms Cuthbert were reported to the DBIS by the liquidator at the conclusion of his inquiry into their business failure. Enquiries are ongoing as to the outcome.

She had tweeted to her twelve followers the previous evening, again presumably in drink, that she was “off to down a bottle of Rosé before the swingers arrive”. A previous allusion to being swingers had been made by Kath and Mark Wilkinson in an interview given to Joshi Hermann of The Manchester Mill in July 2021. According to Joshi, Kath conducted that mid-afternoon interview aided by at least one large glass of Rosé wine.

It is understood from another FIP leak that the first reference to the Wilkinsons and swinging was made by a local man, Paul Griffiths, on the controversial Failsworth Matters closed forum run by Cllr Wilkinson and his wife at the time – and a natural home for all the town’s unusually high concentration of racists and far-right activists.

The recruitment of Warren Bates to the ranks of the Failing Independent Party was an act of desperation on both parts as, according to more leaks from inside their group, a number of other mooted FIP candidates have declined to stand for election to the Council in May. Notably, FIP lieutenant-in-chief, Sandra Ball. They are struggling desperately for any credible individual to attach themselves to a Party that is now widely recognised as being built on a lie, regarded as a laughing stock at the Oldham Civic Centre, with no policies, no worthwhile local achievements, apart from Cllr Wilkinson voting to concrete over the green belt adjacent to the town (read more here).

In recent enquiries on the town’s fastest growing and increasingly popular community forum, Failsworth Moan, it was found that in Warren Bates’ 20 year political career not one single achievement or worthwhile charitable or community act, or good deed of any kind, could be found to put against his name. Including by Wazza himself, a frequent contributor on the site. Nothing. Nil. Zero. A complete blank.

In contrast, lurid eyewitness tales of a ban from Coral Bookmakers over a public order issue, and an alleged assault on a female at or near the same premises, emerged. The response from Bates was his standard: “You know nothing”. A catchline repeated with tedious frequency on the Moan forum when asked straightforward public interest questions on issues such as:

(i) Who paid for the Bates election leaflets used for the May 2021 poll? A rumour said by a FIP insider to have been started by Kath Wilkinson, via a fake Twitter account run by family friends under the name ‘Emily Barnes’, who variously and falsely claims she is a medical doctor (a criminal offence reported to Greater Manchester Police), to the effect that it was ex-Council Leader Sean Fielding, serving councillor Pete Davis or the Oldham Labour Party who picked up the bill. A matter robustly denied by all three. Bates says: ‘I can’t remember’.

(ii) What happened to the charity money pledged by Bates during at least one election campaign wherein he asserted that he would donate half of his Councillor fees to charity? This led to an article in the Manchester Evening News after he was questioned bout the issue in the Oldham Council chamber. Wazza consistently refuses to accede to public requests from concerned constituents to provide copies of his 2004 and 2014 election leaflets saying ‘it is nothing to do with anybody what I do with my personal money’.

(iii) Why as a confirmed, fully committed and vociferous member of a group that style themselves as The Rabble, a supporters group very closely attached to the Mossley based on-bail, under-curfew political activist Raja Miah, has Warren Bates, as a prospective councillor, never once questioned the whereabouts of missing public funds totalling over £2 million: 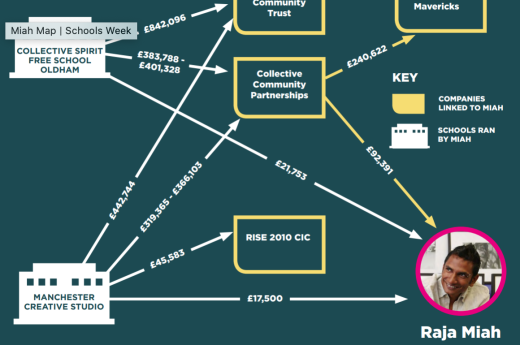 A remark that could also be applied to Wazza’s new masters, Kath and Mark Wilkinson, who both appeared on high profile, lengthy podcasts with Miah and never once sought to raise one of the biggest scandals to afflict Oldham Borough in recent times. Miah has since, following a spectacular falling out, very publicly denounced the pair as ‘Thick as pig shit” over their political ineptitude.

Wazza also fits the natural profile of FIP candidates, of course: Ageing white men with a deep affinity to Raja Miah and his divisive, hate-filled narrative and full quota of far right tropes. Cllr Hobin appeared twice on Miah’s Recusant Nine podcasts and , like the Wilkinsons, never asked a single one of the obvious questions about the £multi-million free schools fraud. For his trouble, Cllr Hobin was also labelled ‘Thick as pigs hit’ by Miah and engaged in a very public spat over it, with the Man From Mossley, whom he had previously hero-worshipped.

Warren Bates and the Wilkinsons has been given right of reply.

Oldham Council press office has been asked to provide a statement from the Council Leader, Cllr Arooj Shah regarding the nocturnal activities of Cllr Wilkinson and the latest revelation over his alleged unlawful intervention in Bride to Be Ltd and the potential for the entire council chamber to be brought into disrepute.

A Oldham Labour Group member has leaked this comment: ‘We are delighted to see that Warren Bates will be on the ballot paper as the Failsworth Independent Party candidate’.

© Neil Wilby 2015-2022. Unauthorised use, or reproduction, of the material contained in this article, without permission from the author, is strictly prohibited. Extracts from, and links to, the article (or blog) may be used, provided that credit is given to Neil Wilby, with appropriate and specific direction to the original content.

5 thoughts on “More holes than a sieve”