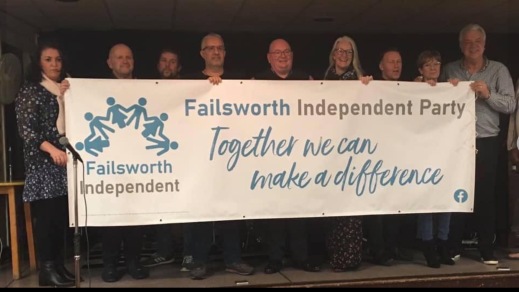 No other Party has announced candidates as yet, including The Real Independent Party who last year fielded self-proclaimed public nuisance, Warren Bates, as its candidate. There was speculation early in the year that he would stand against Cllr Davis as a FIP candidate but that appears to have fizzled out (read more here). Not least, as he now faces a police investigation over election expense irregularities associated with his expenses return in May, 2021.

Sandra, who actually lives in the East ward and is described as ‘a good, old-fashioned Tory’, is an administrator of the controversial Failsworth Matters Facebook forum which has attracted significant, and adverse, media attention. She also runs Failsworth Litterbusters when not living in Spain, where she spends a significant amount of her time. Popular locally, she will present a stern challenge at the polls to Cllr Davis.

Lucia, whose family hail from Arpino in Italy, is reported to run an ice cream parlour in Shaw and does not appear to have been politically active over the past several years. Her Facebook profile repeats numerous times that she is ‘Manchester born and bred’. It is understood, however, that she was a founding member of FIP and an early supporter of the Raja Miah anti-Labour narrative. Given her friendship with Cllr Brian Hobin, the FIP Council Group Leader, who has the dubious distinction of having appeared twice as a star guest on the thoroughly discredited Recusant Nine podcasts, which Miah hosts, that is not a great surprise.

Amongst those whom Lucia follows on Twitter, from a total of just 24, is the stalking, trolling, racist, far-right account, ‘Oldham Eye’. Her candidacy is much the most likely of the two to attract controversy.

UPDATE: Warren Bates has confirmed on the Failsworth Matters forum that he is not standing in the May election. He has pledged to support the two FIP candidates. News that might not be entirely welcomed by the independents as the frequently disgraced Bates is a self-admitted public nuisance.

One thought on “Indies name their candidates in local hot seats”