Skip to content
On Friday evening ( 17th June, 2022) a short announcement on Facebook by the Leader of Oldham Metropolitan Council, Cllr Amanda Chadderton, fulfilled a promise made to the town’s residents by two of her predecessors, Sean Fielding and, more recently, Arooj Shah.

This is the full text of her short post:

“Greater Manchester Combined Authority have today announced that the review into historic child sexual abuse in Oldham will be published this coming Monday, 20 June 2022.
I have today requested an Extraordinary Council meeting for 6pm on Monday 27 June so residents can ask questions and Councillors from all parties, can discuss the findings together.
Questions can be submitted online, on the Oldham Council website, up until 12noon the day before the meeting”. 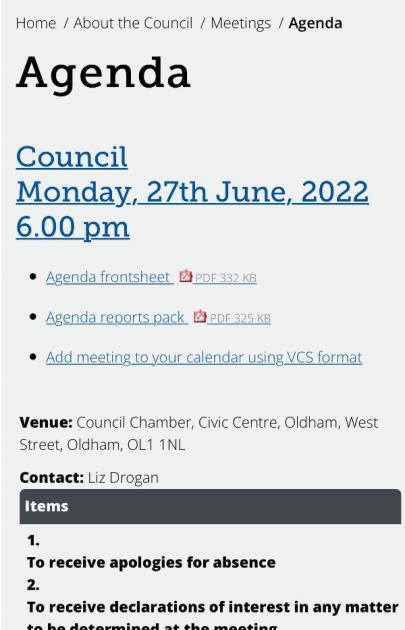 Whilst the Leader’s Facebook post was welcome, it seems an odd way to go about such an important issue. There is nothing relating to the publication date of the CSE Review, or the Extraordinary meeting, on the news section of Oldham Council website and, only if you are familiar with its navigation, would you know where to search amongst a complex array of meeting agendas.

Similarly, and more surprisingly, there is no mention of the publication date on the Mayor’s Greater Manchester Combined Authority website since 2nd May, 2022 when it was announced the Review would be released ‘before the end of June’.

Cllr Chadderton has also made no announcement about the CSE Review on her Twitter feed, used almost exclusively to broadcast Council business.

Indeed, journalists were sworn to secrecy about the actual publication date when a selected group, including the author of this article, Neil Wilby, were notified on Friday afternoon of an event at which it would be made public. On Sunday morning (19th June, 2022), as this article is written, the host venue, has still not been made known. Given that accredited court reporters are routinely trusted with the most sensitive of materials, at inquests, public or departmental inquiries and serious criminal trials, for example, it seems an excessively cautious (and mildly offensive) way of treating them by the Mayor’s office.

There have been no embargoed copies of the report provided to those same journalists, who will be expected, in a period of two hours, to skim read and make notes from a report, expected to be around 300 pages in length, before it is made publicly available. Also the logistics of arriving at an as yet unknown destination, on the first day of a week of restricted timetables due to the rail strike, are not inconsiderable. Especially to those of us travelling from outside the Greater Manchester Region.

The Mayor’s office (and Oldham Council) has also declined to say, in press enquiries made earlier in the week by Neil Wilby, who will be in attendance at those meetings. Of particular interest is whether the chief constable, Stephen Watson, will be present. Greater Manchester Police is expected to face blistering criticism over a range of investigative and disclosure failings. Insiders say he is not relishing the prospect of such criticisms and will duck the meeting if at all possible.

Of secondary interest is whether the GMCA meeting will be chaired by the Deputy Mayor, Beverley Hughes, whose portfolio includes the statutory role of Police and Crime Commissioner. Unarguably, the worst in the country, and by some distance, of those holding PCC positions. Anecdotally, there is some resistance in Oldham Council as to the former MP’s involvement as she is regarded as toxic over her past policing and Parliamentary failings.

Oldham’s Liberal Democrats Leader, Cllr Howard Sykes, had previously called for the Council Leader at the time, Cllr Arooj Shah (as she was then) to make room for a special meeting about the much delayed report into historic, but known, child sexual exploitation in the Borough.

Cllr Sykes said: “At my request, the Leader updated Members [of the Council] at the July, 2021 council meeting on the progress made by the investigation team.

“Given the significant public and elected member interest in the findings of this report, I now hope that the leader will agree to my request to make proper time available at a scheduled council meeting or, as I would prefer, convene a special one-agenda item meeting to discuss this report once it is published.

“In my view, this issue is simply too important to do anything else.”

By way of reply, Cllr Shah said: “As Cllr Sykes is well aware, I am absolutely committed to transparency around the forthcoming report, so am surprised that he fails to acknowledge this in his press release.

“I have already informed Cllr Sykes on several occasions, both verbally and again in writing, that the report will be given proper time for consideration by councillors and there will be a special meeting of full council to allow this to happen.

“The review is completely independent of the Council and we cannot guarantee when we will be in receipt of the final report.

“I can therefore not confirm the arrangements for a special council meeting at this stage – but a meeting will be scheduled as soon as is practical.

“I also feel that, rather than seeking to make political gain out of this issue, it would be much more helpful if we are able to come together as councillors across the political divide to honestly and robustly address the report when it is published – whatever its findings – and ensure we are collectively doing all we can to keep people in Oldham, particularly the most vulnerable, safe from harm.”

Cllr Sykes also appears to overlook that he was, in fact, Leader of the same council for three (2008-2011) of the eleven years under scrutiny by the Review team (2006-2017), led by two of the  country’s leading experts in their field, Malcolm Newsam CBE and Gary Ridgway.

The Oldham LibDems supported a heavily defeated (and ludicrously ill-informed) motion at a Council meeting in March, 2022 calling for a Home Office sponsored ‘independent investigation’ into the Newsam and Ridgway independent investigation. Why anyone would trust either the present Government, or particularly the Home Office, to do anything remotely expeditiously, or lawfully, remains a mystery.

An interesting week or so ahead in the famous old East Lancashire mill town. Not least as there is expected to be a public protest at the Extraordinary meeting on 27th June, 2022 either outside Oldham Civic Centre or within the Council chamber (or both).

Prominent in such a gathering will be members of a group whom self-style as The Rabble (or Raja’s Rabble). They are attached to an unemployed, Mossley-based ‘political activist’, Raja Miah, whose core allegations of a ‘cover-up’ of CSE by the Oldham Labour Party, in return for Asian block votes at local elections, are fully expected to be comprehensively dismissed by the CSE Review.

The script of ‘It’s a whitewash, we always said it would be’ is already being written.

Matters that it is hoped that Cllr Chadderton, in her new role as Labour and Council Leader, will not be slow to air in the Council chamber and with her own Standards Committee.

UPDATE: A short time after this article was published a key stakeholder in the Review process told Neil Wilby that Mayor Andy Burnham will only be present at the press briefing on Monday 20th June, 2022. He is not expected to attend any other meeting, including Oldham Council’s Extraordinary meeting.

The full CSE Review is expected to be published on the Council’s website at 12 noon tomorrow. There is a Leaders’ Group briefing at 2pm tomorrow at the Civic Centre, followed by a Members’ briefing at 5.30pm.