A firebrand Conservative councillor in Oldham whom, after a number of unsuccessful attempts, finally won a seat in the civic chamber by displacing the then Leader of the Council, Arooj Shah, in the Chadderton South ward, is at the centre of more local controversy.

A widely criticised election campaign was run by Robert Barnes in which ‘racist, misogynistic’ leaflets were distributed in the area in a blatant attempt to smear Miss Shah (read more here). In the end, the ‘dehumanising’ attacks proved crucial as the former Leader was beaten by less than 100 votes, after having previously held a comfortable majority.

Although notionally representing Chadderton South, since the election Cllr Barnes has quickly established a reputation for himself as a noisy, ill-mannered self-publicist. His behaviour during a council meeting in June, in which he constantly over-rode the Mayor, who chairs such assemblies, led to a Standards complaint against him (read more here).

His contributions in the civic chamber, thickly layered with sententious piety, have almost invariably concerned child sexual exploitation (CSE) and his hobby horse of pressing for a public inquiry into failings uncovered by a long-delayed report that was published earlier this year. At the core of his contention, which tilts directly against the findings of the report, and all the known facts and evidence, is that Labour councillors covered up CSE in return for Asian block votes at local and general elections.

Having appeared on the partisan, right wing GB News channel in July, counter-intuitively claiming that ‘Labour were blocking democracy’, Cllr Barnes has been silent on the matter since his own Party’s Safeguarding Minister vetoed the inquiry (read more here), as have his fellow Conservative Members on Oldham Council.

That silence is, presumably, not unconnected to the disappearance of the Facebook page, ‘South Chadderton News’, which he ran – and his purging from the pages of both the official Oldham Tories and that of the political ally to whom he, almost entirely, owes his seat on the council, Recusant Nine. The latter is run by an unemployed conspiracy theorist from Mossley, Tameside, Raja Miah, the originator and main proponent of the ‘Labour CSE cover-up’ trope.

A well-placed source says that he has also lost the use of his Council-owned iPad, although there is no official confirmation of that – and neither the local Tories nor the Council press office are prepared to comment on that issue nor his absence from social media.

Cllr Barnes (pictured below second right) also missed two Council organised events to mark the recent passing of Queen Elizabeth II on successive Sundays. As a well-recognised nationalist that would strike the independent observer as strange – and the mystery deepened when several of his fellow Tories present on those occasions were either unwilling or unable to explain his non-attendance. A close friend, Gary Tarbuck (pictured below right) is the de facto leader of Raja Miah’s support group whom self-style as The Rabble. Another close friend and strong political ally, Cllr Brian Hobin of the Failsworth Independent Party (pictured below left), and, completely out of character for him, is also silent on the disappearance of Robert Barnes. 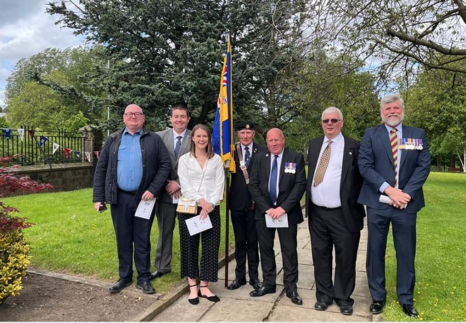 Similarly, his absence from his Chadderton beat has been noticed by other councillors in the area, but explanations are thin on the ground.

Robert Barnes was offered right of reply, via his official email address. He did not acknowledge or respond to that courtesy.

Appropriate welfare concerns have, accordingly, been raised with Oldham Council and the Conservative Party. The Council has, however, separately confirmed that Cllr Barnes is still an elected Member.