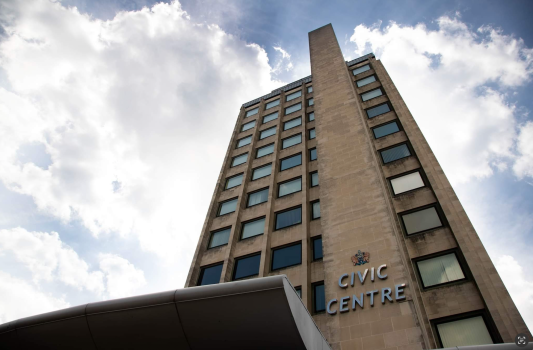 As Oldham Metropolitan Borough Council performs its routine stagger from crisis to crisis, one of its elected Members added to the current drama when, earlier today (14th December, 2022)  he turned up for his second Full Council meeting since his arrest on 8th September, 2022.

Made all the more remarkable as Greater Manchester Police‘s District Commander, C/Supt Chris Bowen, was sat between the Mayor and the Borough Solicitor at the front of the chamber. He was there to give an update on his Policing Plan first delivered to the Council thirteen months ago, about which Neil Wilby Media will report separately.

The subject councillor has also attended a safeguarding training session and a committee meeting at the Civic Centre, whilst on police bail, and refusing to identify himself in order, at the very least, to clear other male Oldham councillors of suspicion. With the Liberal Democrats and the Failsworth Independent Party ruling their Members out, plus the two male independent councillors also cleared of suspicion, it leaves twenty-one male Labour Party Members and seven Conservative with a dark cloud hanging over them.

The only sanction being, so far, is that the Party to which the alleged rapist is attached say that they have withdrawn the whip. Although there is evidence available to the contrary.

Nevertheless, the presumption of innocence must apply and the criminal justice process must not be prejudiced in any way.

His presence is reported to cause significant discomfort to female councillors and paid officers. A ‘walk-out’ from the chamber was mooted at one point, before the last Full Council meeting, but the proposition fizzled out.

Senior paid officers say they do not have the powers, safeguarding or otherwise, to either suspend him from council meetings or ban him from the Civic Centre.