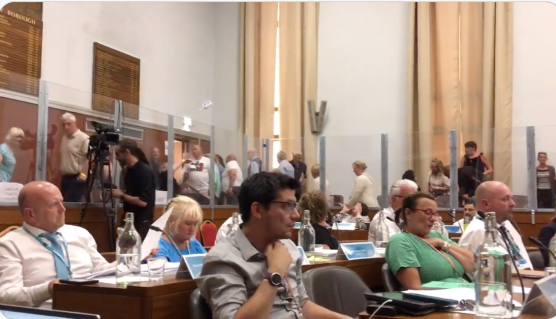 The alleged reposing Members were not identified by name, nor was any pointer given to the reader as to where in the YouTube recording of that meeting evidence could be found. For example, Councillor A can be seen asleep at x hr y secs into the film. Elementary procedure if an accusation of that nature is to withstand scrutiny.

Now the presumption, almost always, is that whatever Miah writes is a fantasy or a narrative so stretched it will break at the merest tug. Not for nothing is he known as ‘Greater Manchester’s most persistent, mendacious liar’. A handle that has gone completely unchallenged by the perpetually noisy, highly litigious Miah for almost two years.

So it very much appears in this case: Contact has been made with a number of councillors, with differing party allegiances, who were sat in different sections of the civic chamber. Not one of them noted anyone asleep or heard snoring. That is backed up by a Council officer who was sat near the front of the room, facing into the chamber for the entire meeting.

The official position is that the Council Leader, Cllr Amanda Chadderton, was asked to provided a statement on the issue, via the press office, but declined to comment. No reason was given.

In the Recusant Nine comments section, under that post, a prominent member of Miah’s supporters whom self-style as The Rabble (or Raja’s Rabble) is also caught out in an even more outrageous lie.

Susan Tuck asserted the following; a remarkable claim on any independent view, but typical of much of the unmoderated garbage, an unhealthy proportion of it being defamatory, that is routinely posted on that platform:

“I had a national statistics lady ’round today and she said that everywhere she’s been everyone is saying this council is corrupt. The survey is to determine deprivation so the council can get more money, and she said everyone like me, said OMG please do not give this corrupt council money. The deprived don’t get it!”

A spokesperson from Oldham Council said in response to a request for a statement,

“We have spoken to the Office for the National Statistics (ONS), and they have stated they would not cold call addresses and would inform the resident by letter that they have been selected to take part in a survey. They go to great lengths to ensure surveys are given in confidence and that they have procedures that they follow.

“We are therefore confident that this is not an accurate account of a visit from a genuine ONS interviewer”.

Raja Miah, if in the very doubtful event that he keeps to his word, makes his last ever Recusant Nine Sunday night transmission tomorrow. If that is the case then the 235,423 residents of Oldham Borough who do not subscribe to his wild conspiracy theories, liberally laced with tales of Asian cartels, mobsters, gangsters, goons, murder and mayhem, will breathe a welcome sigh of relief.

The 190 Recusant Nine subscribers, 15 of whom, incredibly, send Miah £50 per month, could then, perhaps, turn their minds (and money) to volunteering at food banks, or looking in on the elderly or disabled, checking on the homeless, or helping alleviate record levels of child poverty in the Borough.